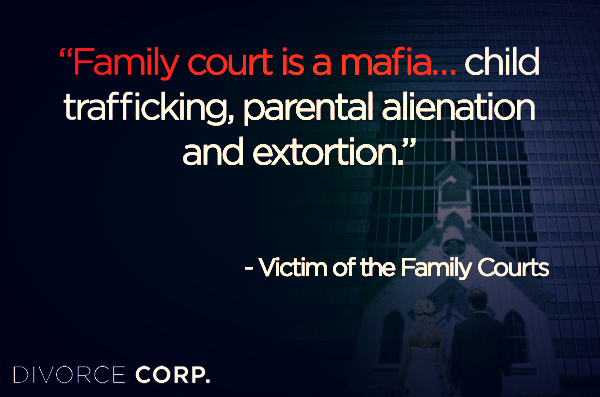 Alienated from your child 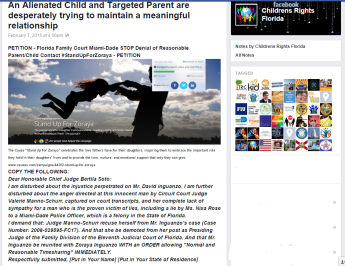 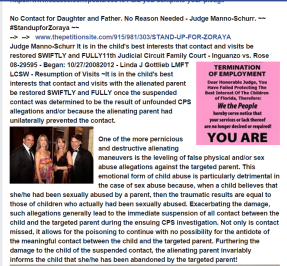 You really said it! I felt your pain and your frustration.

I thought you said it perfectly and explained it clearly. I’ve heard those comments too many times and they were said by people who seem to care about us and were concerned about my situation. It just showed me that people have no clue when it comes to PA or PAS. 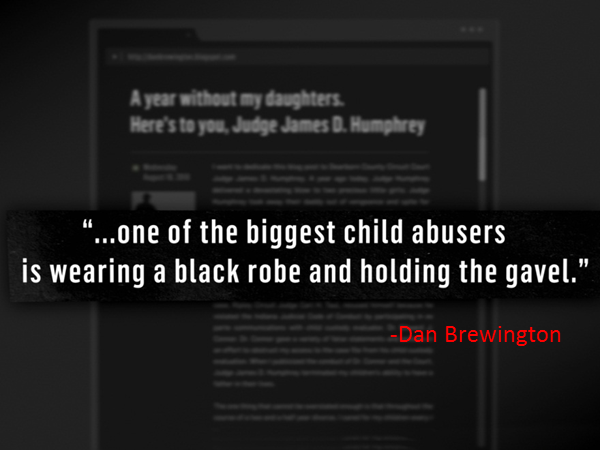 I’ve been fighting now for over 10 years. My oldest is now 21 and wants nothing to do with me. She hates me. My worst nightmare has come true. I have spent every dime, every ounce of energy, and every minute fighting for my 2 children who I love with all my heart and soul. My ex has put my kids through every alienation tactic there is. My kids had no chance of coming through this with anything but hatred for me. I will never give up on them. 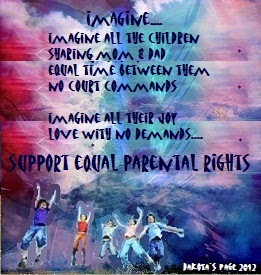 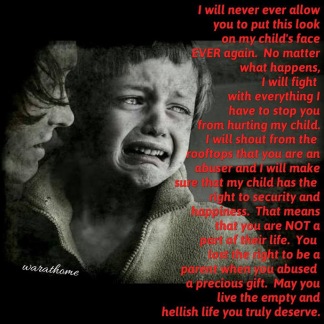 After 10 years of fighting and to get to this point, most people don’t understand why I won’t stop, especially since my oldest rejects me. They no longer give me comments of hope and seem to think I have issues.

They know nothing about PA or PAS. I wish more people would get to know about it, without having to go through it, but I guess that’s the only way people learn about it is when they are going through it. 10 years ago, there wasn’t a name for it and people really looked at me as a bad person to loose my children. I am not a bad parent, I am a fabulous Mom. My children were happy and healthy and a little bit spoiled. My ex had me arrested for something I didn’t do and used that case against me in our custody case. Once he got full custody that criminal case against me was dropped. His lawyer knew exactly what to do to get him full custody. He used that false allegation against me the whole way. 3 months after moving in with their Father, his girlfriend became my 7 and 11 yr old kid’s mom and I became Angie. 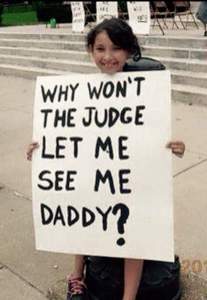 I only want you to know that it doesn’t matter what sex the alienating parent is. There are just as evil Fathers out there alienating Mothers too. I have been screwed by the court system. My lawyers have told me, “the Judge HATES you!” This explains why he got away with never doing what he was ordered to do and won every time we went to court and something was taken from me every time, until I had no rights as a parent and no money. I had the Judge say twice that she didn’t care if it was fair. 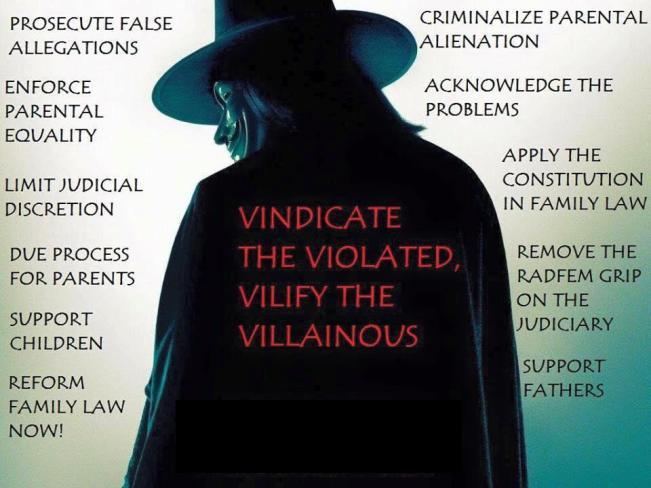 If the Judge wasn’t bias, I would have gotten to see my kids, but she made it impossible for me to see them and she enjoyed being so powerful. First she let him move out of state with our kids, then she added extraordinary expenses to what my child support should be. The extra expense was for daycare that my children never went to and for braces that never ended.

I am still paying for both. If child support would have been based on my income, I may have been able to afford travelling to see my kids, but I had to pay 70% of my income and the Judge didn’t care. 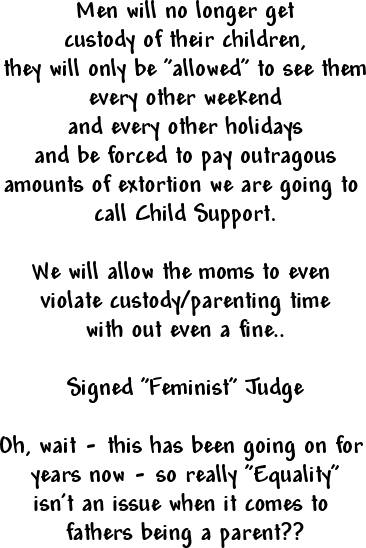 Then I put a motion in to Modify my Child Support. My ex delayed the hearing for over a year. In court the Judge asked me who told me I could quit paying child support for my 20 year old at the time. Needless to say, I had to back pay from when my daughter turn 19 until that day when she said I could quit paying. I became in arrears, just like that. I just finished last month paying child support plus the extraordinary expenses for my 21 year old married daughter who hasn’t lived with her Father in over 2 years. So as you can see things weren’t fair for me either. 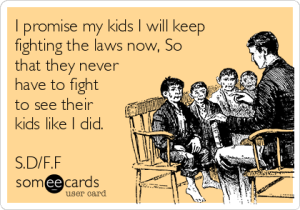 I full-heartedly agree with your posting, I am so glad you wrote about those horrible comments. I’ve heard them all and they sickened me also. 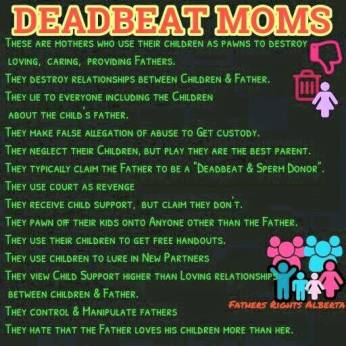 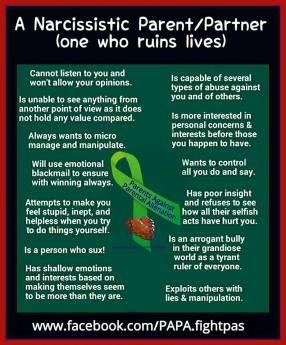 I totally understand where you are coming from, I’ve been there. I’m an alienated parent, but I’m a mom. The sex of the abuser doesn’t matter, they come in both forms. We are both alienated parents- you man- me woman. We both are hurt by the opposite sex and I still hate all men a little……and have trust issues. I’m just saying, I wish you would put less emphasis on because your a man, this has happened to you. Maybe this happens to more Father’s than Mother’s, I don’t know, but it happens to good people/ good parents. 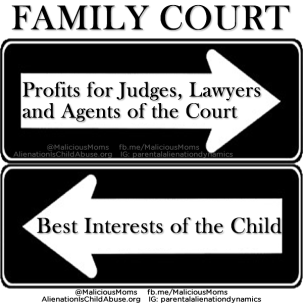 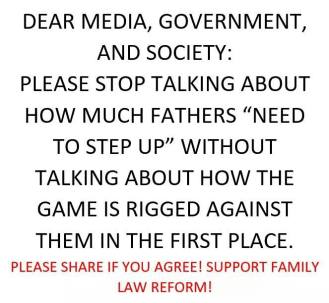 This happened because of who your ex is…

This happened because the Family Court system isn’t in it to help “the people,” it’s in it to make money…

This happened because we were unaware something like this existed until it was already too late, which made it impossible to prevent… 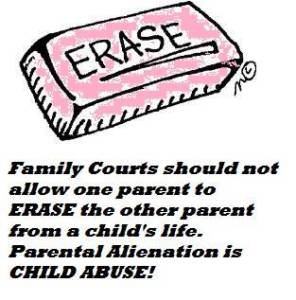 I say WE the alienated people need to stand together and not divide our numbers by our gender. WE have rights as human beings and WE together need to overcome PA and PAS. Not only for our children but for the future generations. We together can figure out how to prevent this, how to fix what’s been done, and what to do to the mentally sick child abusers who cause PA and PAS.
Access the originating page here:

Alienated from your child I felt your pain and your frustration | World4Justice : NOW! Lobby Forum.

19 thoughts on “Alienated from your child.”

Author of Access Denied, The Wretched, The Roots of Evil, The Ghost of Clothes, Omonolidee, First Words and Unzipped: The Mind of a Madman, along with numerous short stories, poems and articles.